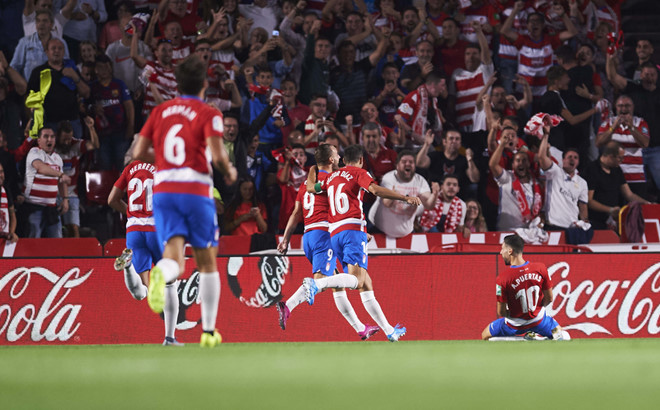 Will the winner of the first El Clasico match of the season in La Liga be the final champion? Ten of the last 13 seasons, that’s it.

Winning Betis in the last round, Granada was 20 points and temporarily ranked 2nd on the La Liga rankings – 2 points higher than Real Madrid, of course in the context of the other giant still in the hands of 1 game. It is worth mentioning: 20 points is the total score of Granada during the whole football season, the last time they were in the first division!

From coach Diego Martinez to the players, no one inside Granada believes they can dispute the championship. Despite leading the way, all still agree on one thing: the ultimate goal this season is relegation. Martinez himself is both the youngest coach (38 years old) and the least experienced military leader in La Liga (this is the first time he has appeared in the highest level).

In short, Granada is causing one of the biggest surprises so far in the Spanish football village. Is it a pleasant surprise, high professional value or not, is another story. Many people compare Granada in La Liga with Leicester in the Premier League. In essence, it is very different. Leicester are well prepared, with very high professional value, when they win the 2016 Premier League or are starting successfully this season (Leicester’s current score is higher than theirs in the same period, in the season when they suddenly won the Premier League).

In contrast, Granada was a poor team in all aspects, when they relegated in 2017. Back then, people do not understand why this team was assigned to former England defender Tony Adams coach. Adams had a lineup of 11 players of 11 different nationalities – none of whom were Spanish. That season, Granada had 39 players, from 21 countries. Including the U.19 team, the B team and the A team, Granada only owns 44 of the 106 players they register. With such a background, it is not uncommon for Granada players to shake their heads when asked about their current top spot.