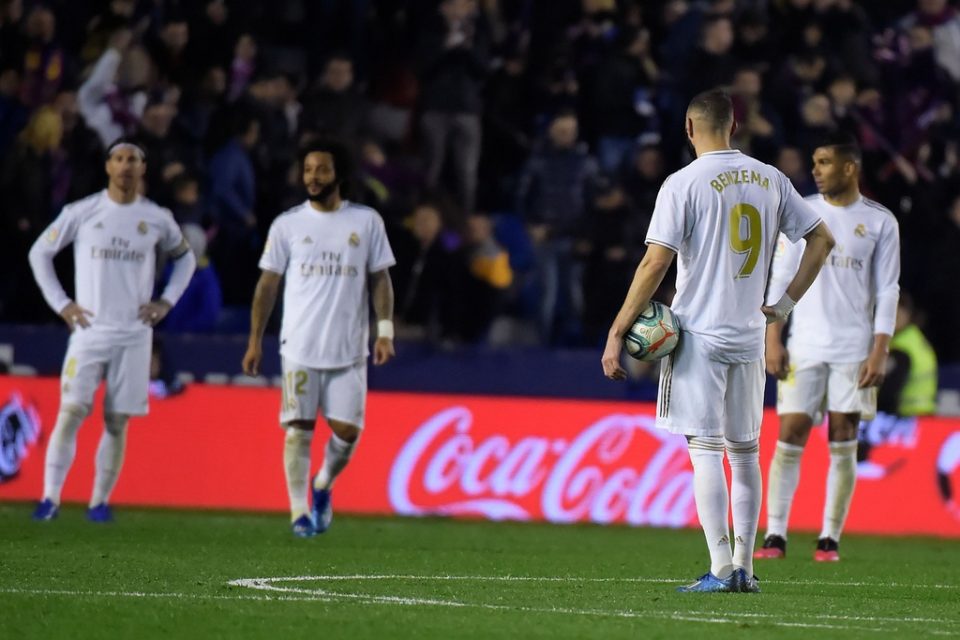 Before Levante, “Los Blancos” competed, but no player knew how to put the ball into the net. Hazard or Benzema had a chance, but the final phase was not smooth. Real also constantly cornered Levante with 35 balls hanging into the penalty area, but the sharp points could not take advantage of the success.

Football is not a game based on losing more than numbers. The outcome of a match based heavily on moments. For Real, dropping points against Celta Vigo and Levante shows they are unstable at the most important moments of the season.

Holding the gold but letting the gold fall, Real should blame himself after the defeat against Levante. They missed the opportunity to maintain a distance with Barca, the team once fell into crisis with internal conflicts. When entering the El Clasico game next week, La Liga’s order was repeated, with Barca above Real.

Real take anything against turbulent week?

Wearing a sorrowful face, Zidane replied to Movistar: “Hazard has an ankle injury. We will conduct more tests, but his situation looks bad”. Before entering the El Clasico match, Real will face Man City in the Champions League with full of instability.

Hazard is not sure how to play because of injury. Not only that, Benzema has shown signs of losing form. Since the beginning of 2020, the French striker has only scored 2 goals in the last 9 matches. Looking at the French striker who was deviated in the processing phase, one saw a lack of confidence in the 32-year-old star.

Losing Hazard, “Zizou” and Vinicius instead. As for Benzema, who is in decline, the French legend could not find any suitable card. It is also the appearance of Real when playing Man City at the Bernabeu on February 27. A team with crippled attack and lack of killer instinct in the penalty area.

According to Forbes writer Jason Pettigrov, Real is also facing a physical problem from the 70th minute. They are said to be the most vulnerable at the moment, because the players are tired due to their age. The moment Jose Luis Morales of Levante hit the net with Thibaut Courtois, they all saw how exhausted Luka Modric was in the accompanying phase.

Real are wearing a pair of unsteady feet into the week of judgment for fate. Their big and unique fulcrum lies in the defense. All expected Courtois to have a brilliant match and not make the same mistake as before Levante.

The roles of Sergio Ramos and Casemiro are also important. They must command the defense system in front of the fast and virtual way of Man City. Once a solid defensive wall is created, “Los Blancos” can pray for the miracle to happen. It could be a header from Ramos, or a masterpiece from Casemiro.

For Real, their masks were removed, and revealed their true form. However, the prestige of a giant in the Champions League, and the Bernabeu fulcrum can become a factor for “Los Blancos” to cling to Man City.