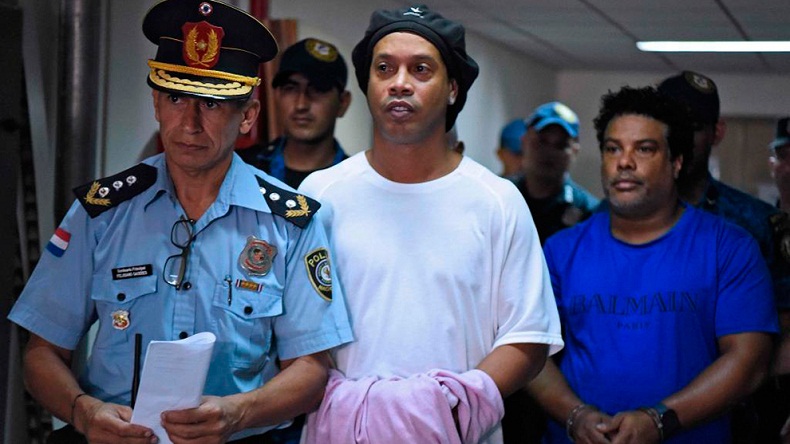 Ronaldinho was accused by the Paraguay Prosecutor’s Office of being involved in a drug trafficking and money laundering criminal organization.

Ronaldinho was detained last week on charges of using a fake passport to enter Paraguay. But the latest disclosure by Reuters shows that the incident is much more serious.

The Paraguayan prosecutor’s office is investigating allegations that Ronaldinho was involved in a money-laundering criminal organization that “enchanted” about $ 400 million in “dirty money” in the country over the past five years. In particular, the focal point is a Brazilian businesswoman, Dalia Lopez, a “Strong Donor” who has very good relations with Brazilian and Paraguayan politicians.

Dalia is the founder of the Fraternidad Angelical Charity Foundation and invites Ronaldinho to Paraguay to attend an event of the foundation. The paparazzi captured the scene of the Ronaldinho brothers accompanying their fellow businesswoman when the three landed at Silvio Pettirossi International Airport on March 4.

Prosecutor Osmar Legal, who led the investigation, said: “Dalia may be involved in a money-laundering plan and this means that we must investigate all those who are involved with her, including Ronaldinho. That is why we insist on detaining Ronaldinho for investigation”.

Their main hypothesis was that they had created fake documents to enter Paraguay and eventually they would be used for some commercial projects or illegal investments. In it, Ronaldinho may appear as an ambassador in Dalia’s charity project.

Currently, the investigating agency is checking the phone of the Ronaldinho brothers in hopes of finding evidence to clear up the case. Ronaldinho and his brother Roberto de Assis had previously offered $ 1.6 million in bail to escape custody, but were not approved.

Not only was she accused of money laundering, but Dalia businesswoman was also suspected of tax evasion and having done business with drug criminals. Paraguayan police have issued orders to pursue Dalia and called on Brazilian authorities to assist with the investigation of this, particularly serious case. In addition to the Ronaldinho brothers, 14 others have been summoned, or are being detained for involvement in the case.